END_OF_DOCUMENT_TOKEN_TO_BE_REPLACED

On 8 February, trade union leaders from the organization at Sofia’s metro operator ‘Metropoliten EAD’ met with the president of the Federation of Transport Trade Unions in Bulgaria (FTTUB) Ekaterina Yordanova at FTTUB headquarters. During the meeting, the FTTUB team reviewed FTTUB’s 2018 priorities, the important campaigns and the key events that are ahead. Among the campaigns, the ETF’s ‘Fair Transport’ 2.0 campaign received special attention. In her speech, Ekaterina Yordanova highly appreciated the role of the organization at ‘Metropoliten EAD’ in negotiating better incomes and working conditions in the Company’s CBA, which was signed at the end of last year. END_OF_DOCUMENT_TOKEN_TO_BE_REPLACED

END_OF_DOCUMENT_TOKEN_TO_BE_REPLACED

A greeting speech of the Sofia Mayor Fandakova gave start to the opening ceremony of the metro station “Vitosha” yesterday, July 20th. She welcomed union representatives too. On the St Ilia’s day the newly built feature was celebrated with a traditional Christian ritual of inauguration and at 2 PM the regular traffic started. But the first train entered the station and stopped in it while it was presented to the official guests.
Among them were the prime minister, the ministers of transport, finance, culture, the representative of the European Commission in Bulgaria, National Assembly deputies and municipal councilors, including, of course, the chairman of the Metropolitan Committee for Transport and Tourism Ekaterina Yordanova. Both with her colleague Mr. Barbalov, Vice – Mayor and Chairman of the Finance Committee, they received special thanks from Mayor Yordanka Fandakova. She stressed that the project would not be carried out without the assistance of the government, the EC and the structural funds, but also without the people who worked on it – employees of the metropolitan Metropolitan headed by the Executive Director Eng. Bratoev, designers and builders. Some of them were rewarded for their excellent, efficient and timely completed work. The Prime Minister Borisov joined the congratulations. END_OF_DOCUMENT_TOKEN_TO_BE_REPLACED 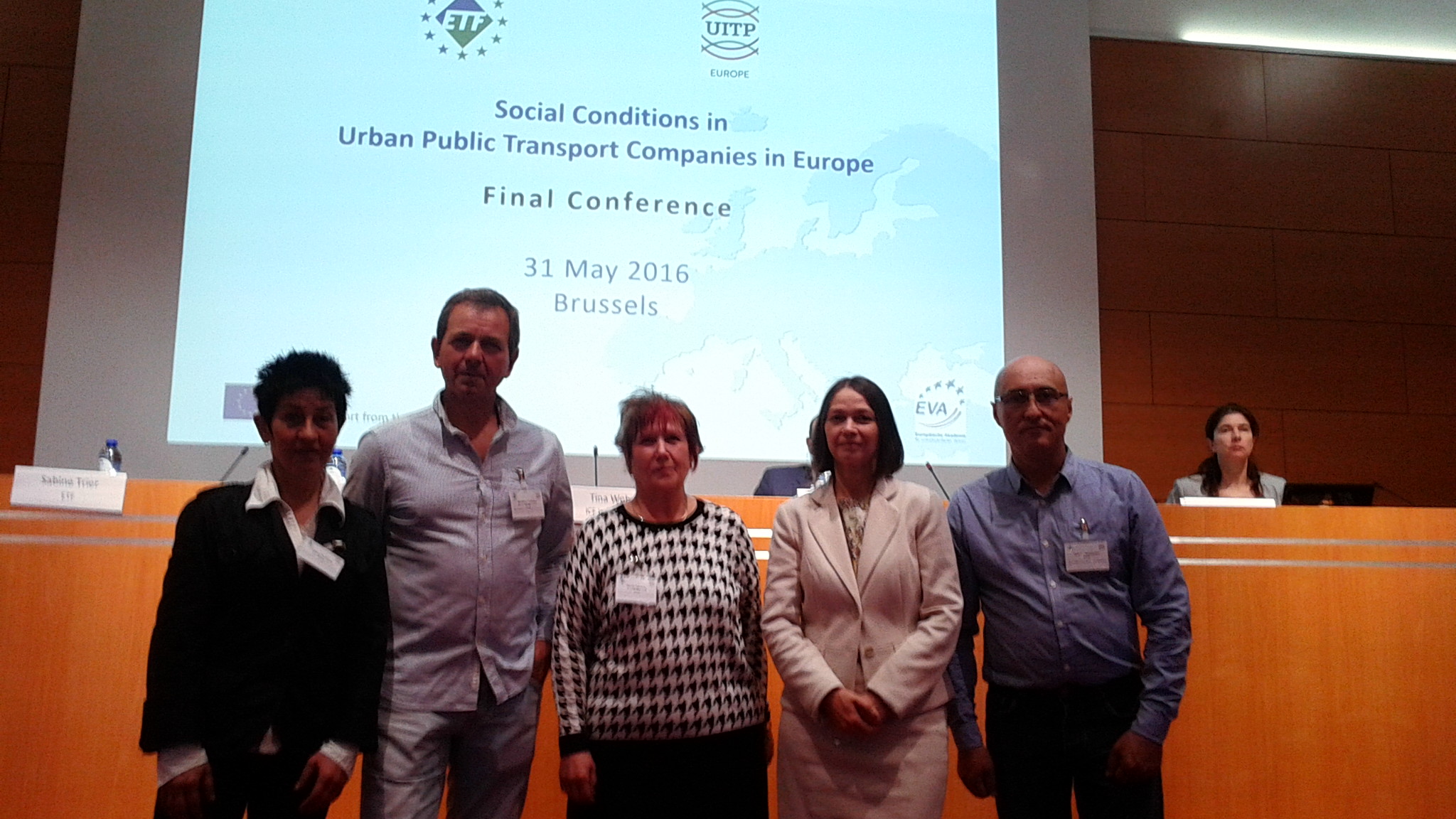 Social conditions must be developed both through collective bargaining and as official social policy and they should go hand in hand – that was the point in the speech of the European Commission representative Sigried Caspar at the final conference of the European social partners’ project on social conditions in public transport. It was held in Brussels on May 31 this year. The event was attended by FTTUB trade union leaders from the four metropolitan companies – SUMC, “Sofia Electrotransport”, “Sofia avtotransport” and “Metropolitan” – B.Danchev, E.Ivanova, N.Naydenov and T.Pachkova.

At the conference, the performed project study was presented as well as examples from Germany, France, Austria and Bulgaria. END_OF_DOCUMENT_TOKEN_TO_BE_REPLACED

and its partners within the Discussion Forum “Socially responsible and sustainable development of the transport” held on 10 May 2016 in Sofia,

After discussing:
– The state of the sector and the problems in the particular sub-sectors;
– The on-going legislative initiatives at European level;
– The negative impact on the sector that unfair competition and gray economy produce;
– Their basic and destructive impact on social systems, democracy and statehood;
– Their impact on the lives and welfare of both employed in the sector and civil society;
– The need for enforced actions and guarantees on the social dimension of economic changes;
– The important social role of the transport as a provider of primary public service;
– The general desire for safe, modern, convenient, environment friendly and affordable transport;
– The need for uniform, clear rules, social standards and quality in transport services for all EU citizens

the whole Bulgarian civil society and all EU citizens living in Bulgaria
to support the efforts for balanced, socially responsible and sustainable development of transport and transport services
and dedicate one minute of their time
to take part in the petition and give their voice along with the rest of the EU citizenship
to support the ECI “Fair Transport”
on the website of ECI www.fairtransporteurope.eu
or through the websites of FTTUB and CITUB.
Together we can make the European and the Bulgarian transport fairer!
Let’s do it! Join today!

On May 10, 2016 in “Central” hotel in Sofia a Discussion Forum “For socially responsible and sustainable transport development” was held. The forum has been organized by the Federation of Transport Trade Unions in Bulgaria (FTTUB) and “Friedrich Ebert” Foundation. It was attended by representatives of the Ministry of the Transport, Information Technology and Communications; Ministry of Labour and Social Policy; the Confederation of the Independent Trade Unions in Bulgaria; affiliate unions of FTTUB; transport companies; NGOs; media. END_OF_DOCUMENT_TOKEN_TO_BE_REPLACED

On  January 27 and 28, in Frankfurt, Germany, the third and final workshop on the European social partners’ project “Social conditions in public transport” was held. Its beginning was the seminar in Sofia, and it is expected to close by a conference in May. The seminar was attended by Nikola Rusatev – the deputy sector representative for public transport in the FTTUB Youth Committee and Mila Nikolova, expert. END_OF_DOCUMENT_TOKEN_TO_BE_REPLACED