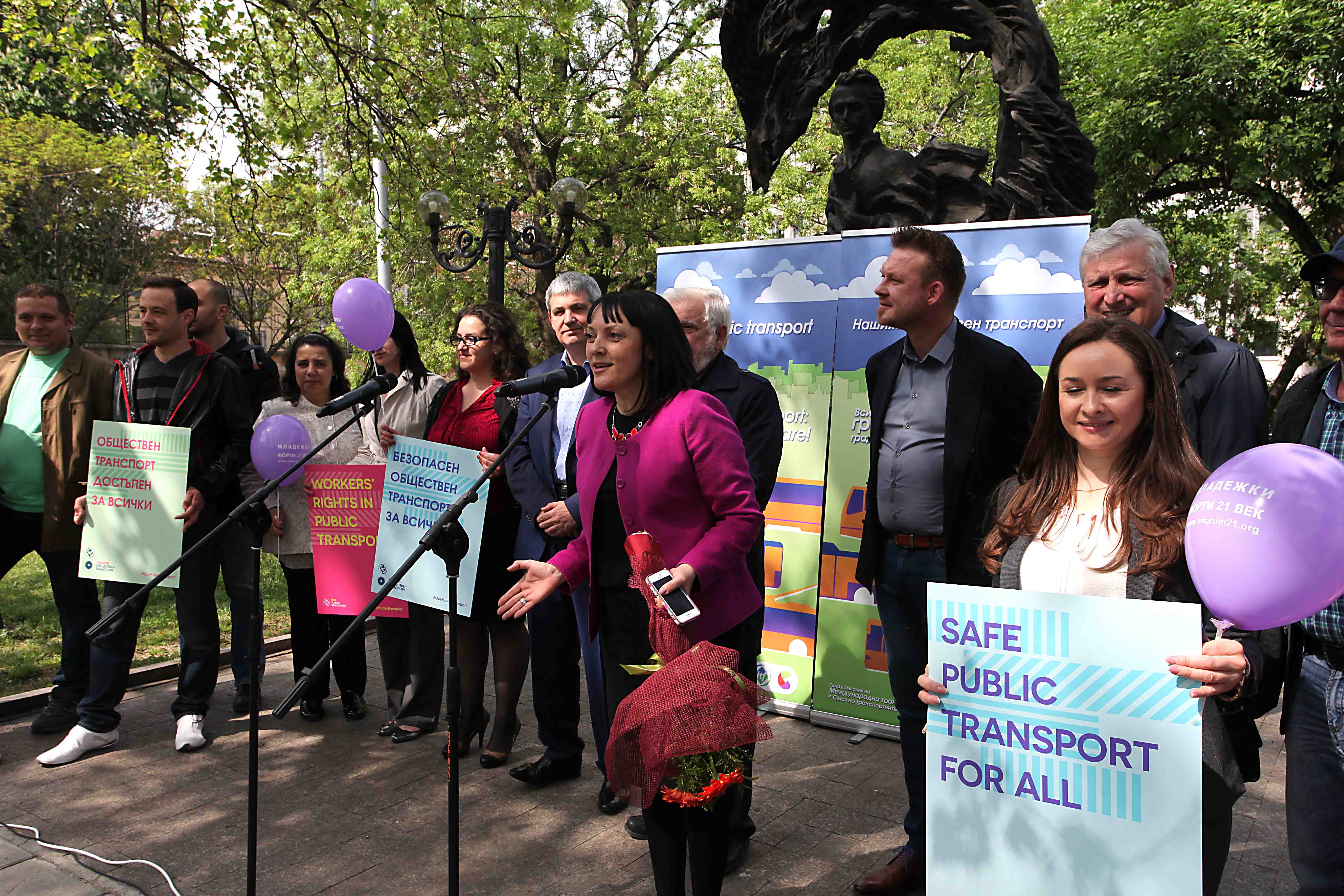 “Labour Day is the day of workers, of trade unions, not parties. It is our day. That is why I am glad that today we can share it with the big family of CITUB and ITUC” said FTTUB President and ITF vice president Ekaterina Yordanova at the opening. Honorary guests were Antonio Lisboa, member of ILO’s Governing Body; the President of the Workers’ Group at European Economic and Social Council (EESC) Georges Dassis; and the president of PERC’s Youth committee Tatiana Marian. Sofia municipal transport companies were represented by the Managing Director of metropolitan bus company Slav Monov, and Todor Modev – a member of the Board of Directors of ‘Metropoliten’ JSC.

“The ITF has seven important campaigns, one of which is concerned with public transport. Public transport is for all of us and we all need to work together – citizens, local authorities, employers, trade unions – to achieve a better life for our people, develop our cities and protect our nature by improving mobility and reducing emissions”, said Ekaterina Yordanova. She emphasized the efforts trade unions will make to improve the working environment and motivation of the workers, because only this can help achieve quality service and hence increase the number of people using public transport. This explains the Bulgarian motto of the campaign – ‘Everybody for public transport, public transportation for everyone!’ According to her, FTTUB will continue to work for the implementation of equality policies in urban transport, because according to its studies, the increased number of women drivers will lead to an improved working environment and a better service. She thanked the employers from the metropolitan transport companies for implementing joint projects with FTTUB for achieving equality and combatting violence at the workplace. Mrs Yordanova also thanked the mayor of Sofia Yordanka Fandakova for the fruitful partnership with the FTTUB, which commenced during her first term and continues to this day.

After the official opening ceremony, everybody took a tour on a retro-tram around the city where they learned about the benefits of public transport from FTTUB’s youth organization members who were distributing brochures among citizens. The attractive tram was most enjoyed by the children. They learned that it was 116 years old and one of the first to operate in Sofia after the Liberation.

Later in the day, Ekaterina Yordanova presented the campaign “Our public transport” to the participants in the conference “A Future for Labor, a Future for Young People in Europe” organized by the International Youth Forum.

She also participated in the National Conference on Payment and Labor Rights, organized by CITUB, where she presented the pay gap between men and women and how it affects the economic independence of women.

Representatives of FTTUB participated in the youth information campaign “No to Violence at the Workplace!” organized by Youth Forum 21st Century. Here, FTTUB presented “This is my oath!’ campaign, aiming to prevent violence against women.