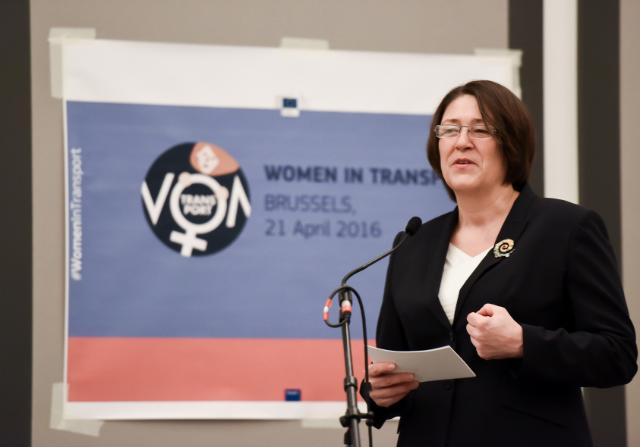 “I am proud of being a woman,” declared the EU Commissioner for transport Violeta Bulc at the one-day conference “Women in Transport” organized by the European Commission on April 21 this year in Brussels. The participants were also addressed by Ines Ayala Sender, member of the Transport Committee of the European Parliament. Besides institutions, representatives of social partners, NGOs, research and marketing environments took part to the event. On behalf of FTTUB there were Daniela Zlatkova, member of the Women’s Committee of the European Transport Workers Federation and Mila Nikolova, expert on gender equality policies.

The conference discussed the conclusions of the European Economic and Social Committee (EESC) official opinion “Women and Transport”, published in the end of July 2015,  in whose preparation the ETF WsC actively participated by his political secretary Christina Tilling and Inga – Lena Heinisch. The opinion officially confirmed what the unions had alarmed for longtime – low level of female participation in the sector and strong vertical and horizontal segregation.

In search of all possible solutions and assistance by all stakeholders the participants performed various group tasks the last of which was to formulate five ideas for steps to be taken at different levels. They were invited to record their data if they are willing to cooperate. So, throughout the day the European Commission received a list of specific proposals and a team ready to work for their implementation. FTTUB also intends to involve for expressing positions and safeguarding the interests of its many female members.