In the eve of the official opening of ITF 44th Congress in Singapore, FTTUB president Ekaterina Yordanova gave the  “LEADER OF CHANGE” award to Mary Liew, the General Secretary of the Singapore Maritime Officers’ Union, the host organization of ITF 44th Congress – for being an exceptional woman leader, who dedicated all her time and enormous energy to making the 44th ITF congress in Singapore possible.

Thе commemorative award “LEADER OF CHANGE”, established in the name of Yordanka Radeva, the first woman president of FTTUB, is being awarded to prominent women with outstanding achievements in the social, political or cultural life in Bulgaria, or women leaders with a global contribution to improving the situation of women in the society and at the workspace. These are exceptional women who know how to uphold their rights and the right of all women in the world to live in equality, to fulfil their potential and to freely pursue their dreams.

The award comes in the form of a rose, but also resembles the silhouette of a woman. It was born a few days ago by the skillful fingers of Antoaneta Stoimenova: another gentle and strong woman; an artist and an inspirer; and a member of FTTUB team. The statuette is made with a mosaic of pink opal – the stone of peace and tranquillity; pink quartz – the stone of love; melchior, marble, 24 carat golden smalti – fitting for a queen; and millefiori (‘thousands of flowers’)

“Mary is a dear friend, an exceptional woman leader, and a fellow sister whom I have known and worked with for years in our joint fight for a better world for women transport workers.” – commented Mrs Yordanova on the occasion. – “With this award, our family of 126 Bulgarian trade unions and their members says ‘Thank you, Mary, for having dedicated all your time, passion, vision, and enormous amounts of energy to the international family of transport workers and the ITF! Thank you for making the 44th ITF Congress in Singapore possible!’ 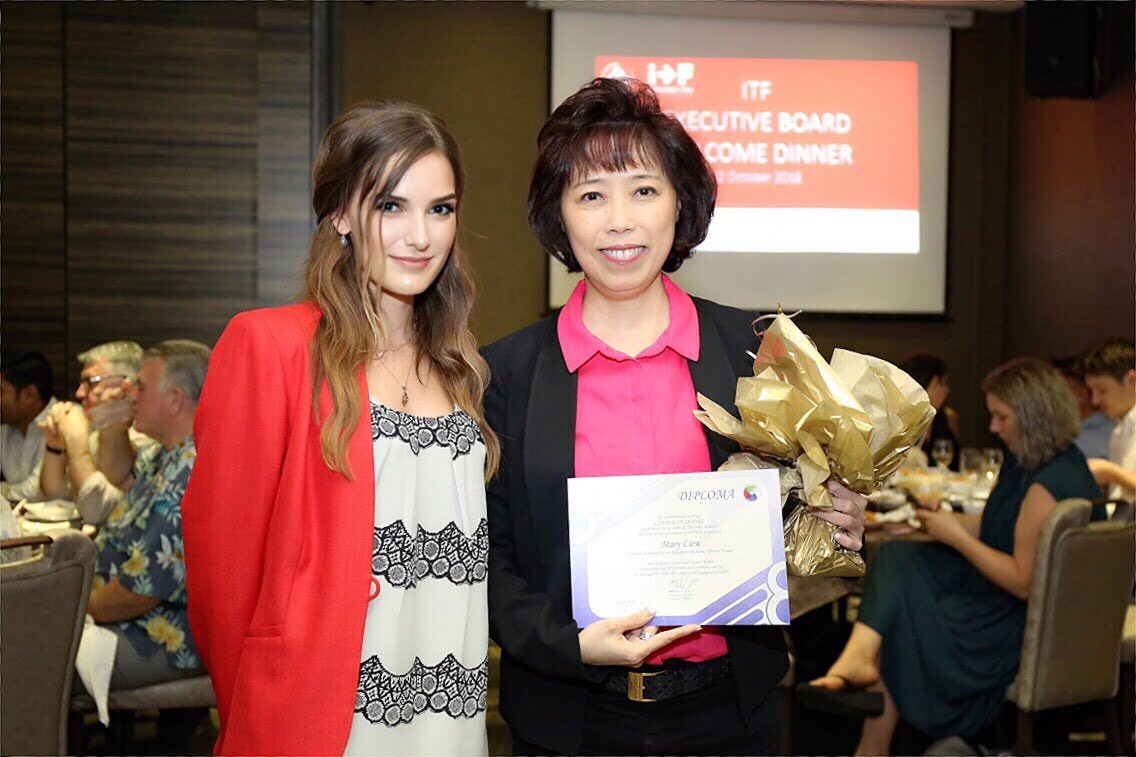 “I myself and the FTTUB delegation, feel honoured to be your guests in your beautiful country which deserves admiration for its social and technological advancement; and to be participants in the ITF Congress that will decide the fate of the transport sector for the next 5 years! And we are herе for you, Mary and SMOU! To support you, to back you up in making this Congress the most successful ITF journey!” – with these words Ekaterina Yordanova summed up the emotions and expectations of all Bulgarian delegates.

The previous 43rd ITF Congress in Sofia was also organized by a woman leader and hosted by FTTUB. There is beauty in this symbolic hand-over of the relay from one woman leader to another. It also makes us believe that the future of transport workers from all over the world is entrusted in good hands.