A historic event for Bulgaria was launched on 24 September 2015 – the national campaign “Business in light for a better future” of the Confederation of the Independent Trade Unions in Bulgaria (CITUB) and the Confederation of the Employers and the Industrialists in Bulgaria (CRIB).
The initiative had been started in Burgas and Varna, and finally, on 25 September in hotel “Marinella”, it was presented to the public in the capital by the presidents of both organizations. The joint crusade of employers and trade unions against gray economy was supported by the authorities – governmental and local, as well as by the Bulgarian Industrial Capital Association (BICA). The meeting was honoured with the presence of the Minister of Finance Vl. Goranov and N. Angelkova – Minister of Tourism, one of the “shadiest” sectors of Bulgarian economy. They all expressed their points of view, their parts in the initiative and their ideas for action against this sensitive issue. 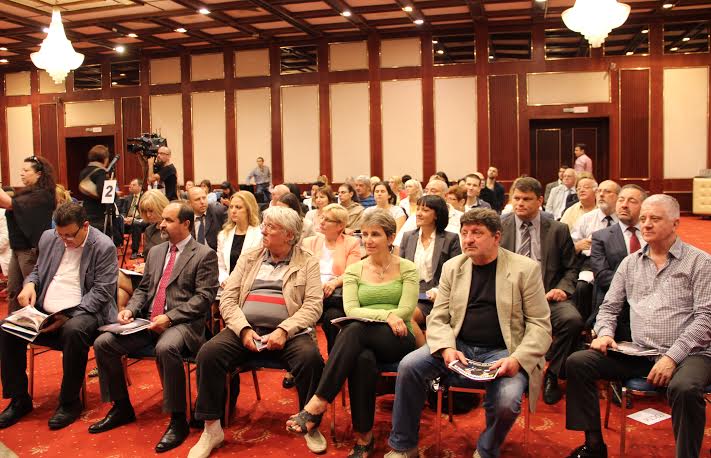 Over 30% of Bulgarian economy belong to this category, which is destructive not only for the fundamental market principle – the competition, but for the democracy itself by creating insidious relations of dependency through the generated cash flows. The goals of the campaign are to create an attitude of intolerance towards the gray economy by nationwide public support, to identify the main related problems and to seek for solutions. Stakeholders unanimously identified as the most immediate task the adoption of amendments to the Public Procurement Act to stop the abuse of public funds. Other measures envisaged for “lightening” the economy are an increased state control over suspicious entities and dissemination of best practices of the 100 best Bulgarian companies. All participants admitted that the huge challenge that can only be met with united efforts.
At the meeting, FTTUB was presented by the President Ekaterina Yordanova, I. Tsakova – Member of the Board and representative of the industry, and Mila Nikolova, expert. They congratulated the participants for the initiative and for the wonderful example of partnership in action and urged them to join the European Citizens’ Initiative (ECI) for Fair Transport. Ekaterina Yordanova is a member of the Civil Committee of ECI and Bulgaria is one of the seven countries – initiators. Emphasized was the direct link between the gray economy and the deteriorated conditions of life and work, against which ECI was launched.