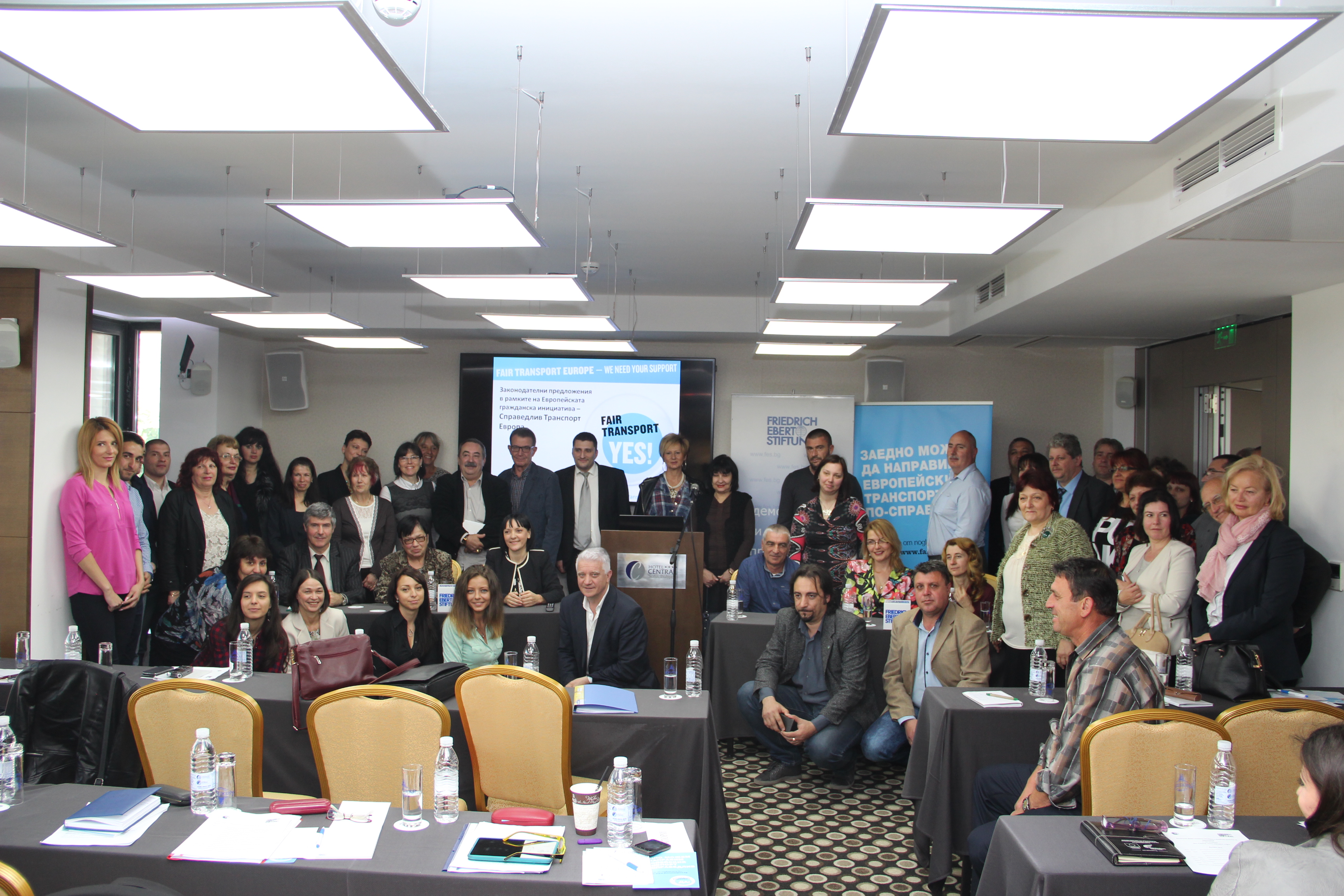 On May 10, 2016 in “Central” hotel in Sofia a Discussion Forum “For socially responsible and sustainable transport development” was held. The forum has been organized by the Federation of Transport Trade Unions in Bulgaria (FTTUB) and “Friedrich Ebert” Foundation. It was attended by representatives of the Ministry of the Transport, Information Technology and Communications; Ministry of Labour and Social Policy; the Confederation of the Independent Trade Unions in Bulgaria; affiliate unions of FTTUB; transport companies; NGOs; media.

The forum was opened by Ekaterina Yordanova, President of FTTUB and vice president of ETF. Participants were also addressed by “Friedrich Ebert” Foundation  and Chavdar Hristov – vice president of the CITUB, Anton Ginev – deputy – minister of Transport and Communications and Doncho Barbalov – vice – mayor of Sofia Municipality.

Greeting speeches highlighted the situation in the transport sector, the key challenges and a vision of their overcoming. Thus, practically, they gave the start to the discussion on the matter. Speakers expressed a common position that sustainable and balanced growth in transport is inseparable from its social role implementation and both must be developed together. The way is through the government policy at national and local level conducted in constant and constructive social dialogue in the sector, in which FTTUB actively participates.

During the forum, the attorney in law Simeonov presented the European Citizens’ Initiative (ECI) “Fair transport”, whose national coordinator he is. As the FTTUB members are aware, the initiative insists for quality transport services and sustainable growth in the transport sector through common European legislative norms and social standards and better implementation. “The ‘Fair Transport” ECI is very important for achieving, through direct citizens’ participation, more sustainable and socially responsible development of transport and better quality transport service, “said Yordanova.

The experts of FTTUB Daniela Zlatkova, Antonia Panajotova and Mila Nikolova presented the issues in the road, rail, air and waterborne transport sectors. They highlighted the forms of unfair competition – a major obstacle to the transport development and main reason for the deterioration of social standards. Experts cited analyzes and pointed the key legislative and complementary actions at European level aiming at clearer rules and better control mechanisms for dealing with cross-border fraud and informal sectors. These phenomena injure both workers and all citizens of the EU. “Our efforts through the FTTUB activity are part of the European efforts for ensuring social guarantees,” said Mila Nikolova, FTTUB international relations expert.

In conclusion, the participants of the Discussion Forum formulated general guidelines for sustainable development of the Bulgarian transport. FTTUB committed to forward them to the competent authorities – the Ministry of Transport, Information Technology and Communications. The Union supported by the forum launched an official appeal to the Bulgarian civil society for broad public support of the ECI “Fair Transport”. It calls for voting for greater social justice in transport, sustainable development of the sector and better quality transport services for citizens.

During the Discussion Forum most of the attendees gave their vote in support of ECI “Fair transportation” on the spot. You can do it here, too.