Participants in a Regional Youth Conference united around the idea that there is a need to strengthen the role of ITF in the Balkan region. The conference took place on 9 August 2017 in Sofia. It was organized by the Federation of Transport Trade Unions in Bulgaria (FTTUB) and its Youth Committee, on the occasion of the International Youth Day – 12 August. It was attended by young transport workers, activists of the transport unions from Bulgaria, the Balkans and Europe. Among the participants were members of the International Transport Federation (ITF) Youth Committee from Poland, Macedonia, Bulgaria, Croatia, Barbados and Argentina. 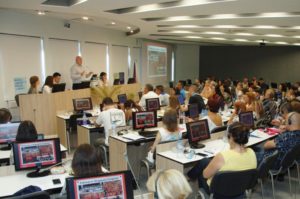 The youth week started on 9 August 2017, with a regional youth conference, with official guests ITF general secretary Steven Cotton and ITF vice-president Ekaterina Yordanova, who is also and FTTUB President; as well leaders of FTTUB member organizations within the metropolitan transport companies. Sofia Deputy Mayor in charge of transport, Evgeni Krussev, was also an honorary guest. He welcomed the participants as a representative of the city hosting the conference. 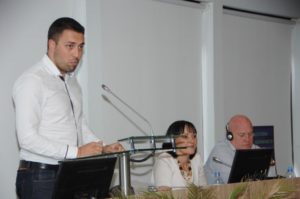 “I believe trade unions need young people to drive the transition to modern trade unionism. I think that we, young people, also need to be part of a working structure, to uphold our rights – even more so in a time of ruthless competition starting as early as school years and turning us, youth, into individualists. The unions show us the opposite – how can you work in a team, and for a common cause.” – said the co-chair of FTTUB Youth Committee Alina Milusheva at the conference opening.

“The purpose of this conference is for us, young transport workers, to check if we are on the same wavelenght; and see what problems and issues is everybody facing back in their countries, and how are they dealing with them. We also want our peers from the region to join in on ITF’s work, get to know its program and its strategy, and see our Bulgarian experience in this respect.”, Alina Milusheva added. 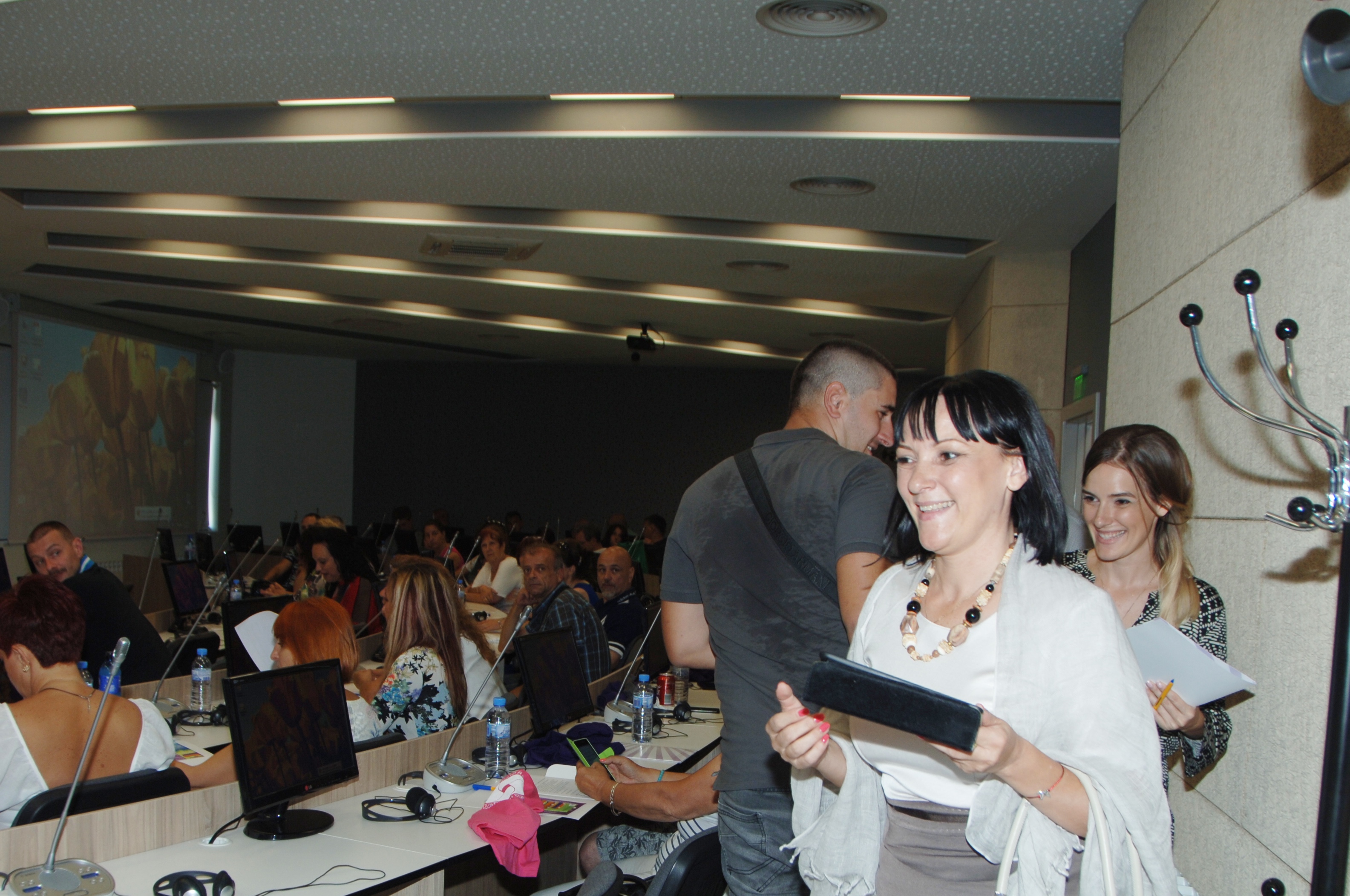 “In the global world of today, we are all so connected that the only way to act is to constantly look for the global processes in our daily affairs; and to give answers day by day to the important global issues. So we strive to apply this model in our work”, said Ekaterina Yordanova in her address. In her words, for FTTUB the most important areas of work are the horizontal policies, as they are not limited to one or two sectors, but are relevant to workers in any sector of the economy and reflect the universal aspirations of all people. As such, she outlined UN’s global Sustainable Development Goals..

“We believe it is strategically important for the ITF to recognize these goals as its own, and to use its power as a global network of solidarity-led and democratically organized people to help achieve them faster and in full power. Not only will our unions and our members benefit from this, but we will all feel rewarded and happy, and will be much stronger for having participated in something big!”, Ekaterina Yordanova added.

Among the important priorities of FTTUB she listed gender equality, equal pay, the fight against violence in all its forms, the work-life balance and social life. As another key FTTUB priority, Mrs Yordanova pointed the union’s work to guarantee young people fair incomes, quality and secure jobs and the opportunity for full development of their personal and professional potential. 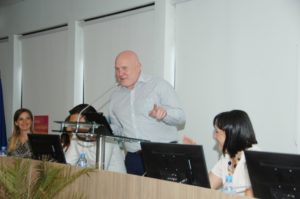 During his speech, Steven Cotton, general secretary of the International Transport Federation, presented ITF’s ‘four levers’ strategy and asked young people to get actively involved in preparing the documents for next year’s Congress. “The world is developing at an extremely fast pace. New technologies are changing it and posing new challenges for people at work, new jobs appear while others disappear. That’s why we need your perspective as young people”, said Stephen Cotton. He called on the participants to challenge the current leadership by putting forward the problems of young people. “Do it – because today we are the status quo, and tomorrow you will be in our place and you will make the big decisions,” Cotton said.

Baker Khundakji, ITF global youth coordinator, spoke to the participants about the ITF’s strategically important areas before the next 44th Congress, and how the ITF sees the role of its young members. The co-chair of FTTUB’s Youth Committee and a member of the ITF Youth Committee, Alina Milusheva, presented the role of the youth in activating mass trade union membership.

The next presentation was dedicated to UN’s Global Sustainable Development Goals and was presented by the members of the ITF Youth Committee – Camille Butler, Serena Brown, Paolo Cestoni and Dorothea Zech. They, along with Alina, told everybody why UN targets for sustainable development are so important to trade unions and the young people within them; and how the International Ttransport Federation can help to achieve them. 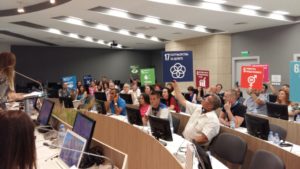 The second panel of the conference focused on the Bulgarian experience, which was presented by FTTUB experts. Daniela Zlatkova presented the Bulgarian experience in implementing the latest ITF campaign “Our Public Transport”. On 1 May, it did best exactly in Bulgaria, and Sofia was the host of all main activities. It actively involved both trade unions and the employers representing the metropolitan transport companies.

The presentation of Mila Nikolova from FTTUB emphasized the role of women in urban transport. FTTUB best practices in policies for young women were presented. The topic is a crossroad of two federal horizontal policies – equality between women and men – and attracting youth for membership and leadership, Mila Nikolova said. FTTUB presented its vision of synchronized actions on every level – from global to workplace and vice versa, combined with an integrated approach and the establishment of broad horizontal networks for synergy, among which regional cooperation play an important role. 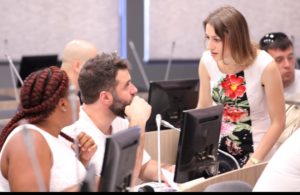 Elitsa Bikova, FTTUB’s youngest expert, paid special attention to the tourism sector and its relation to transport and trade union potential for Bulgaria, for FTTUB, for the region, Europe and the world. It reviewed the employment of young people in the sector on all these levels,as well as the new types of tourism and forms of employment, and the possible techniques for attracting trade union members from the sector.

Later, participants were divided into two working groups, discussing “Our public transport” camapign; and the activation of mass membership. The youth united around FTTUB’s idea that the Balkan region has a serious potential and many opportunities for a stronger trade union presence. Therefore, ITF 44th Congress should put in its programme documents a special focus on the region and strengthen its influence and activities, by attracting young people, setting up training centers, strengthening initiatives for young people and women, and creating different forms of social and cultural cooperation. 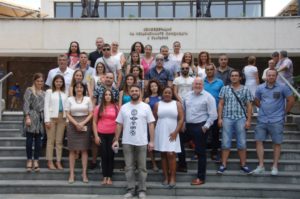 Finally, everyone received as a gift from Ekaterina Yordanova a special booklet of Bulgarian Tourist Union with the top tourist sites in Bulgaria. The movement “100 National Tourist Sites – getting to know Bulgaria better” was established in 1966 to attract interest in the most significant and largest tourist sites in Bulgaria. These are natural landmarks, museums, cultural and historical monuments that are part of our national heritage. Ekaterina Yordanova addressed the young people with the challenge for each of them to visit as many of the objects as possible, and then share their experiences with the others through words, pictures and videos, in just one year.