The training package contains 4 modules on various topics related to gender equality in transport, complemented by a training kit facilitating the implementation of the 4 modules in actual training situations, and a whole range of tools to help the trainer – who could be both an activist and an academic level professional. The biggest advantage of the training program is that it is adaptable to the specific needs and resources of every workplace and each trade union organization. END_OF_DOCUMENT_TOKEN_TO_BE_REPLACED

On 9 – 10 February 2017, the ETF together with ACI Europe and Airport Services Association co-organised a workshop on training and quality standards in ground handling. This event is part of an EU co-financed project in the framework of social dialogue.  http://fttub.org/ground-handling-social-dialogue-support/ 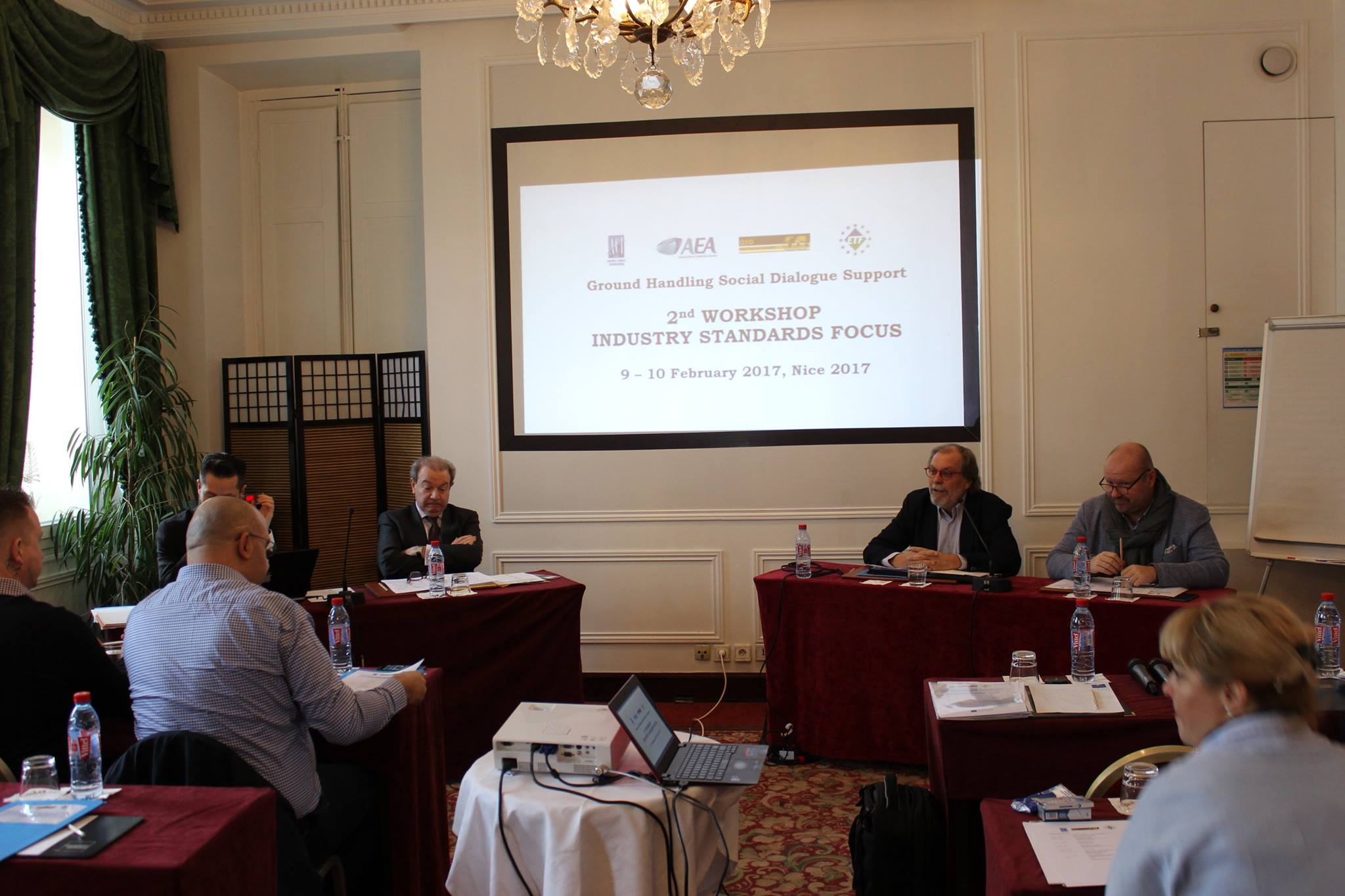 As a starting point of the debate, STC-Group (consultant of this project) presented the results of their desktop research and case studies in the selected countries. This was followed by the presentation of the views of the individual organisations and a debate with the audience.

The three organisations agreed to explore possible common grounds on the revision on the EASA Basic Regulation as well as preparatory work for the assessment of the Directive 96/67/EC on ground handling services. The final conference presenting the outcome of the project will take place on 28 – 29 April 2017 in Copenhagen.

The Social Partners representing employers and workers in the European Ground Handling – ACI Europe (ACI), Airport Services Association (ASA) and European Transport Workers’ Federation (ETF) – met on 8 and 9 December 2016 in Barcelona to discuss the issues of market access and social conditions in the ground handling industry. This workshop was part of an EU co-financed project in the framework of social dialogue.

The aim of the project is to prepare social partners’ views in light of the assessment of the Directive 96/67/EC that was announced as part of the Commission’s Aviation Strategy for Europe. Before the workshop, an extensive research has been conducted by the consultant company Syndex consisting of desktop and questionnaire research.

The participants agreed that market opening without social regulation has caused excessive pressure both on the ground handling companies and workers. There is a need for rules that will ensure level playing field and binding social protection for the workforce.

Therefore, all the three organisations will continue their joint efforts to have a sustainable and fair ground handling sector. The next workshop taking place in February 2017 will look at quality and training standards. Finally, the closing conference in April 2017 will present the outcome of the project to a wider audience.

FTTUB was represented at the workshop by its International Relations and Civil Aviation expert Antonia Panayotova who is also a member of the Steering Committee of the project, as well as by Petranka Shomova, a chairman of FTTUB’s  trade union organisation at Varna Airport and by Albena Vasileva from FTTUB’s organisation at Sofia Airport.

On  January 27 and 28, in Frankfurt, Germany, the third and final workshop on the European social partners’ project “Social conditions in public transport” was held. Its beginning was the seminar in Sofia, and it is expected to close by a conference in May. The seminar was attended by Nikola Rusatev – the deputy sector representative for public transport in the FTTUB Youth Committee and Mila Nikolova, expert. END_OF_DOCUMENT_TOKEN_TO_BE_REPLACED

On 12 and 13 November 2015 in Paris was held the second seminar within the project “Social conditions in public transport companies in Europe”. The first one had earlier taken place in Sofia (see here). The European Transport Workers’ Federation (ETF), EVA academy and UITP – the employers’ organization for public transport, are partners in this project.
The FTTUB representatives Mila Nikolova and Madlen Yordanova, sectoral representative to the Youth Committee, participated in the seminar titled “Employment and working conditions.” There were presented the findings of the study conducted by ICF through questionnaires in public transport enterprises of 11 European countries. END_OF_DOCUMENT_TOKEN_TO_BE_REPLACED 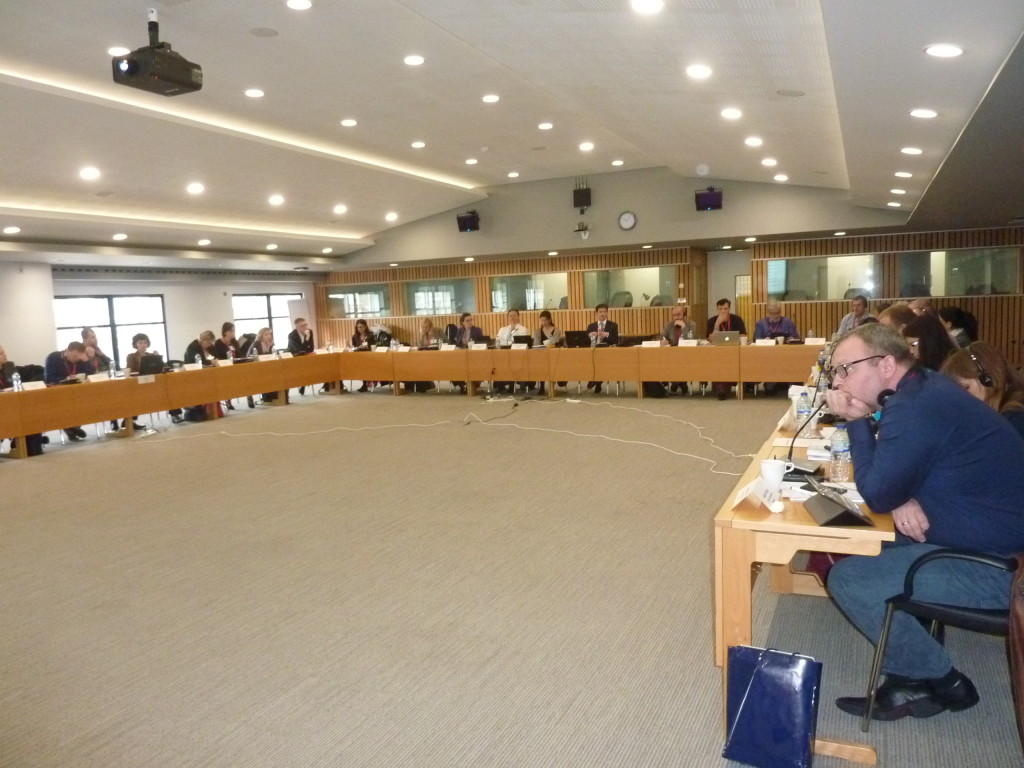 On 4 and 5 November 2015, at the ITF headquarters in London, the FTTUB representatives Daniela Zlatkova and Nadezhda Staneva participated in a seminar on “Perspectives for employment and training of staff in railway companies.”
At the seminar, a study on the promotion of employment and quality of work in the European rail sector was presented. The study had three focus points: END_OF_DOCUMENT_TOKEN_TO_BE_REPLACED

On February 19, 2015 was successfully completed another training “Basic knowledge of English”, which FTTUB already traditionally organize for their affiliates.
After three months, full of effort, diligence and perseverance, students from the Trade union of Sofia Airport successfully passed the final exam and received their certificates.

END_OF_DOCUMENT_TOKEN_TO_BE_REPLACED

After the visit of CITUB and FTTUB reps in Austria last December(see here), on 26th and 27th January the visit was returned. Our guests have also been trained within the international project for decent work. Doris Bauer is employed in a governmental organization leading social projects and Harald Obenhaus is a TU activist working in a company for new generation automotive and railway parts.
In the morning of 27.01., the guests visited the headquarters of FTTUB. They have been acquainted with the activities of the Federation on various projects. Ms. Serkedjieva, Director of VTC, presented the FTTUB trainings – both professional and trade union ones. Important trade union issues were discussed, including how to work on through trainings and projects at national and international level.

END_OF_DOCUMENT_TOKEN_TO_BE_REPLACED

From 15 to 17.12.2014g. Mila Nikolova – FTTUB expert and Martin Ivanov from the CITUB visited Austria as last phase of a Confederation’s training in decent work, part of a joint international project. There, in the rich and full of meetings program, they met trainers and participants in the same training; visited labor unions, public structures, infrastructure projects and sites related to transport, in response to the interest shown by FTTUB.
During the first day the guests were given a brief presentation of the structure and way of conducting social dialogue, in which Austria differs from the other European countries. END_OF_DOCUMENT_TOKEN_TO_BE_REPLACED